How to stop a fire without a fire extinguisher

Only use these tips to tackle minor or small fires, campfires and so on; if you’re faced with a structure fire or a house fire, get out as quickly and safely as possible, and call 999. Do not attempt to tackle a blaze, with or without an extinguisher. 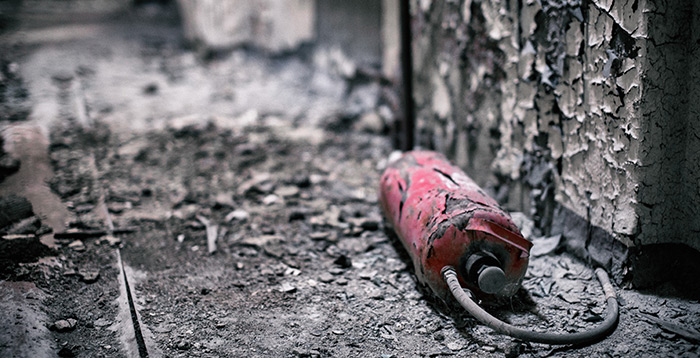 House fires most commonly start in the kitchen – and the chip pan fire is one of the most famous examples of why you should never use water on an oil-based fire.

Water is denser than oil. Upon meeting the burning fat, it will sink to the bottom of the pan. The heat causes rapid expansion of the water into steam. Because of the confined space in the chip pan, the burning oil spews out with explosive force. The vaporised water then acts to spread the oil out, increasing its surface area and contact with oxygen, letting it burn more easily. This escalates a manageable situation into a deadly one: around 50 people are killed in the UK every year by chip pan fires.

With most cooking fires, the best course of action is to attempt to snuff out the flames. On a chip pan or stovetop fire, a fire blanket is the best solution. If you don’t have one of your own, a slightly damp tea towel will work. Always turn off the heat first – and remember – never throw water over the flames.

In shallow pans, simply lidding it can be enough to put the fire out safely. A very large quantity of bicarbonate of soda or salt can be used to snuff flames out, too. Don’t use flour, though; flour is flammable and will simply add fuel to the fire.

Microwave and oven fires can occur over long periods with high cooking temperatures. Cutting the heat and the flow of air should put a quick stop to small flames, so switch the appliance off and leave the door closed. Stay vigilant and do not be tempted to open the door until the flames are completely gone – reintroducing oxygen can make things much worse.

Like a chip pan fire, water should not be used on an electrical fire. If it’s safe to do so, try to unplug the device first to stop the flow of power and production of heat. Bicarbonate of soda in large quantities can snuff the flames, releasing CO2 as it becomes heated – but larger fires should be left alone when they become unmanageable. If that’s the case, exit as quickly and safely as possible, and call the emergency services.

Most other small fires can be safely extinguished with water – as long as they’re not chemical, oil/fat or electrical, then use a mop bucket or washing up bowl full of water to douse the flames.

Staying ahead of industrial fires

Since the introduction of ‘The Regulatory Reform (Fire Safety) Order 2005’, fire safety today is at a much better standard…

Why Fire Curtains are Essential For Schools In many schools, open-plan spaces are central to their functioning. For example, sports…

The science behind the fire curtain

Coopers Fire are compliant to the UK Government guidance to ensure our workplace is a safe environment.
Previous Back Next