2019 in review: Year of heritage building fires and forest blazes

2019 was a busy year for fire. It struck notable world heritage buildings, like the blaze at Notre-Dame de Paris and al-Aqsa Mosque in Jerusalem. Some of the biggest news stories of 2019 (and the start of 2020) centred around wildfires. We’ve witnessed the tragic loss of life, natural habitats and property to fire seemingly all over the world – and there’s little sign of it slowing down. 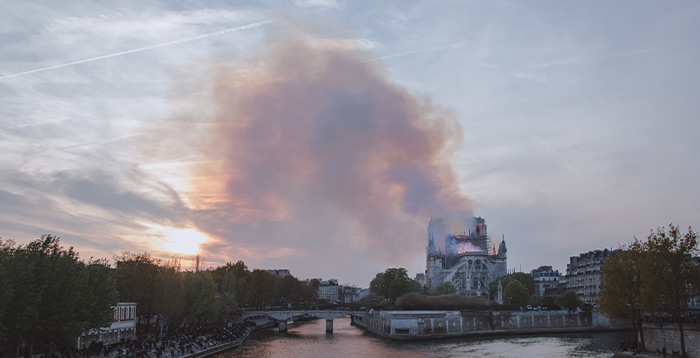 The fire at Notre-Dame was significant. Thankfully, nobody was hurt – but the damage could take decades to rectify and some of it can’t be undone. There’s even a risk that the building is unsafe, leaving its future uncertain.

Two-thirds of the roof was destroyed; the wooden spire collapsed and took out the ceiling below it. Irreplaceable stained glass windows were destroyed, along with priceless artworks and religious artefacts. One such relic – a crown of thorns – is said to be the exact crown placed upon the head of Jesus Christ at his crucifixion.

The porous stone of the structure is saturated with the water used to stop the fire. Drying alone could take years, as water has percolated down to the catacombs where extraction will be especially difficult – but it’s essential to prevent weakening.

With a decades-long list of work to do ahead, what lessons were learned?

The fire detection system, while reasonably advanced, had no connection to emergency services. False alarms in such a busy building are probably quite common, but an automated call to emergency services could have saved the site in this case. Instead, a scout was sent to inspect the roof and no fire was found – and only after a full 30 minutes of burning was the fire service called.

The security officer inspecting the fire was new on the job, and on a second eight-hour shift because cover had not arrived. The fire alarm system, while advanced, has been blamed for being confusing and prompting the wrong part of the roof to be inspected.

Better automation, staff training and monitoring systems could have brought the fire to a halt far sooner – and these lessons should be reverberating in the ears of all heritage site caretakers. It’s also a call to integrate automated sprinklers or other active fire suppression systems. Fears of accidental water damage in the face of the unmitigated destruction at Notre Dame are clearly unfounded.

The World on Fire

Arguably, the most important fires of 2019 took place in nature; specifically, the Amazon rainforest fires. The whole world mourned as more than 40,000 fires ravaged 3,500 square miles of land, destroying habitats, threatening homes and lives – as well as pumping out incredible amounts of carbon. Now that the dry season is over, fires have abated and thoughts have turned to the other side of the globe where Australia is gripped by deadly wildfires.

The latest Australian bushfires started in September 2019 and continue to this day, in January 2020. 29 people have been killed and a minimum of one billion wild animals are thought to have died (not including insects or frogs), some now facing complete extinction. Thousands of homes have been destroyed. 26 million acres of land have been burned or are currently burning, and the fire continues to spread.

These fires are the worst Australia has faced in recent history.

In both the case of the Amazon and Australian fires, there are complex political undertones about the approach to wildfire management and how conservative governments view and respond to climate change; but the driving forces are simple enough.

There have been acts of arson in both regions since humans first discovered fire. Land clearing for commercial purposes has long been part of the history of both Brazil and Australia. Bushfires themselves are an annual event.

What’s new is the climate: the dry season is longer than before, and it’s the reason for such unprecedented burning. As the world becomes hotter and drier, fires like this can only worsen in this new decade. The response from society, government and business will shape the future.

At Coopers Fire, we’re always developing, testing and improving our products – to keep us at the cutting edge of fire safety in a changing world. To find out more about fire curtains for historic buildings, or to enrol in one of our educational training courses, call us on 02392 454 405 or email info@coopersfire.com.