The importance of fire safety in historic buildings

Historic buildings carry with them the weight of the past – and for better or worse, they’re ingrained in our culture and national identities. Of course, London without the Houses of Parliament, Buckingham Palace or Tower Bridge is still London – but if these iconic landmarks were destroyed, Londoners would surely feel a profound sense of loss – just as the people of Paris did when Notre Dame suffered a devastating fire in April 2019. 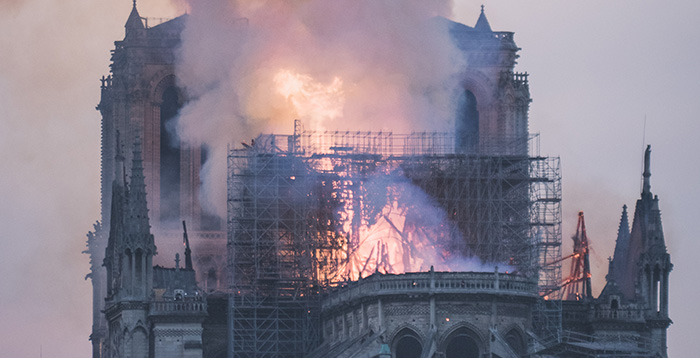 The fire at Notre Dame destroyed two-thirds of the roof, as well as the spire and the ceiling directly below it when it collapsed. Some of the irreplaceable stained glass windows were damaged or destroyed, and priceless artworks and relics have been lost. One such relic – a crown of thorns – is said to be the exact crown placed upon the head of Jesus Christ at his crucifixion.

Notre Dame de Paris has a somewhat sophisticated fire detection system, let down by human error and a lack of modern integration with the emergency services. The alarm was first raised when a fire was detected in the roof space, and the building was evacuated. The roof space was inspected, and no fire was found. It was after a second alarm was raised more than 20 minutes later that flames were discovered, and the fire brigade was alerted. The emergency services were only alerted after more than 30 minutes of burning – which is ample time for a roaring blaze to take hold.

The building itself represents an extreme fire risk due to its age and material composition, and renovation works in certain areas had been limited due to this.

At the time of the fire, renovations were underway – and it’s thought that either an electrical fire broke out in the highly sensitive roof area, or that a discarded cigarette, found on scaffolding in a renovation area, started the blaze.

While nobody was harmed, the fire put hundreds of emergency services professionals at risk, as firefighters battled the flames and attempted to rescue as many precious artefacts and artworks as possible.

If an automated emergency services caller had been applied to the fire detection system, the scale of the damage could have been reduced to next to nothing – and the risk to life would have been all but removed.

The Notre Dame blaze has, quite rightly, thrown the fire safety at heritage sites into dispute. So, how have other, similar sites responded?

The Church of England has taken extra precautions in light of the Notre Dame fire.

Speaking in parliament, Caroline Spelman (Church of England representative and Conservative MP for Meriden) highlighted the importance of fire safety for historic buildings, saying they are particularly vulnerable if necessary building works are overlooked.

She said: “Since the Notre Dame fire, the Cathedral and Church Buildings Division has worked with the Cathedral Architects Association to ensure its records are up to date and will continue to work closely on this issue and are considering a national conference on the matter.”

How Coopers Fire Can Help

Heritage buildings are uniquely challenging for fire safety professionals – which is why we find them to be so rewarding to work on. Beyond the standard Codes of Practice in place to protect life from fire, Coopers Fire has developed bespoke compartmentation, smoke curtains and fire curtains for iconic historic buildings – like the Sydney Opera House, Buckingham Palace, the British Museum and York Minster.

Preserving these structures is important to the heritage of the areas they’re part of – and keeping them safe and secure for future generations is a big part of why we love working on them. The challenge of exceeding safety standards while maintaining the original look and feel of the building is one we particularly enjoy, and we’re proud that the innovations we’ve developed have put us at the forefront of the industry.