The colour of fire and its temperature are directly linked; red flames are cooler, blue flames are hotter. Acetylene and pure oxygen burns blue, at over 3,400ºC – the hottest temperature readily achievable with fuel and flame. That’s hot enough to melt tungsten, which has the highest melting point of any element.

And while that’s extremely hot on our very narrow human scale, it’s nothing compared to the temperatures achieved by nature. There may even be no limit to temperature as we know it; it could be a bizarre, infinite loop where hot becomes cold. 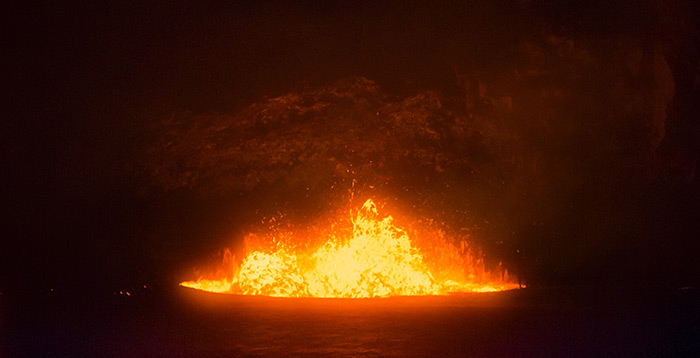 Absolute zero is a relatively simple concept; there’s a defined, final temperature for cold, which is minus 273.15ºC (or 0 kelvin). At that temperature, particles stop vibrating and all heat is leached from the affected system. It was thought to be as cold as anything can go, ever.

The laboratory record for the coldest temperature is one billionth of a kelvin. In nature, the coldest temperature recorded was 1 kelvin, from an outgassing nebula far off in space. But even if the universe goes on forever and experiences “heat death,” absolute zero could take an unthinkably vast time to be reached, and it may never happen at all in nature.

That’s a lot of zeros. And it could go further, depending on how nature is built at the fundamental level.

Let’s start by getting a sense of scale. Exceeding fire, which humans can easily get to reach over 3,400ºC, is no problem for nature. Lightning on Earth creates a white hot explosion of plasma that reaches 27,000ºC. That’s almost five times hotter than the surface of the sun. Anyone who’s been close to a lightning strike can attest to the heat a bolt can give off.

The sun’s corona has a temperature of a few million degrees kelvin – nobody knows for certain how hot it really is, or why the sun’s surface is cooler than the space around it, and it remains one of nature’s great mysteries. There are two prominent theories; one claims that sound-like waves heat the corona from the interior, the other that the sun’s magnetic field is responsible.

Humans have managed to achieve temperatures of around 4,000,000,000,000ºC (4 trillion degrees) in the Large Hadron Collider, but only for a fraction of a second.

Absolute zero and absolute hot aren’t compatible ideas – even though they try to describe the same thing. While we’re quite sure that absolute zero (while not achievable) exists, we have no idea about the upper limits, because there isn’t enough energy to reach those lofty heights.

Thanks to our fascination with fire and temperature, we’re discovering more about heat, fire and nature than we’d ever thought imaginable.

Our expertise has led Coopers Fire to become a leader in fire safety. We manufacture industry-leading fire and smoke curtains and provide educational training courses and consultancy.

Nothing can last forever – including a fire. Eventually, the fuel source will be exhausted and the heat will radiate…
Previous Back Next