How the proscenium has changed

For non-theatre types, you’ll probably know the concept better as the fourth wall – a part of theatre that has remained in place since the Ancient Greeks and Romans first popularised acting on stage. The imaginary barrier between the audience and players, in today’s world, is an important part of fire safety. 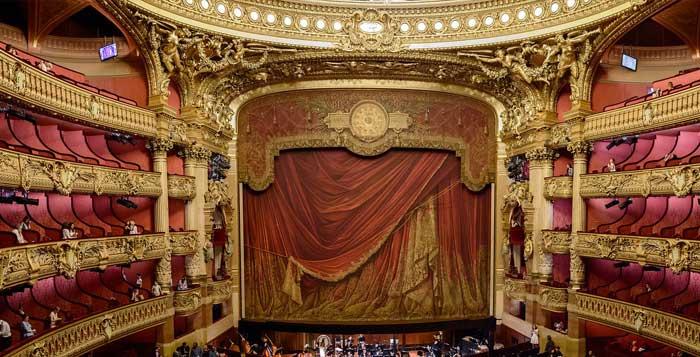 In modern Western theatre, the stage and audience are separated by the proscenium, or fourth wall, where the curtain traditionally falls; it’s the window onto the stage. But it hasn’t always been a flat virtual surface.

Ancient Greece was the birthplace of theatre as we know it today. Theatres were carved into hillsides as great semicircular rows of steps – where crowds would sit to observe ceremonies and plays. Performances were held on a semicircular stage at the base, with a small building behind that served as a backstage area.

The half moon shape of ancient theatres meant that the proscenium followed the same pattern – the fourth wall is still present, it’s just rounded in shape. These ancient theatres were copied very closely by the Romans – but the attitudes towards actors were not.

Ancient theatres were open air, reducing the risk of fire and making escape in the event of emergency somewhat easier to facilitate – although fire is known to have destroyed a wooden roof in at least one ancient theatre. Amphitheatres, it seems, were more susceptible to fire; the precursor to the Colosseum was burned down in the great fire of 64AD.

Tragically, fire would become one of the greatest scourges of theatre in modern times. The fire safety we take for granted today wasn’t always in place.

Theatres and Fire; a Brief History

Shakespeare’s Globe Theatre in London burned down in just two hours when fire broke out during a performance of Henry VIII in 1613. Although one of the most famous theatre fires in history, not a single person was harmed – but there were reports of a burned pair of trousers.

But the Globe fire is an outlier; it’s frankly quite miraculous that nobody was hurt. Sadly, history is strewn with deadly theatre fires – and some of them have resulted in catastrophic loss of life.

The Brooklyn Theatre in New York burned down when lighting caught fire, killing an estimated 300 people. The top gallery had only one staircase as a means of escape – which quickly became congested as it was flooded by a panicking crowd. 100 of the victims were unidentifiable.

Around 200 people were killed when the Theatre Royal in Exeter burned down. A fire started when a piece of scenery was set alight on stage by a falling gas burner. The ensuing panic and chaos caused a stampede – and poorly planned exits cost hundreds of people their lives. Amazingly, no lessons had been learned from the theatre’s predecessor, the New Theatre, which had burned down on the same spot just two years earlier.

These catastrophes finally ushered in the age of proscenium safety curtains – using active compartmentation to defend theatregoers in the event of a fire.

A proscenium safety wall is a fire curtain placed on the proscenium arch, which drops to compartmentalise the auditorium from the stage and backstage areas. It prevents the spread of fire from areas where it is most likely to break out (onstage, backstage or from lighting rigs) into the most vulnerable and populated areas.

The fire curtains used to be manually operated – but this was unreliable. In 1903, the asbestos fire curtain at the Iroquois Theatre in Chicago became snagged during a blaze at a matinee. Because it wasn’t working, the curtain was abandoned, allowing the flames to spread into the auditorium.

This was compounded by an enormous backdraft which occurred when the rear doors were opened for the cast and crew to escape. That fire claimed 600 lives – many lost as people jumped to their deaths to avoid burning.

Today, fire curtains in theatres deploy automatically and reliably – thanks to new technology and regular, diligent maintenance. With uninterrupted power supplies and failsafe measures in place, fire curtains are more reliable than they’ve ever been.

And we continue to work on making them even better.

Acting for a Safer Future

At Coopers Fire, we’re always developing our products to keep us at the cutting edge of fire safety in the entertainment sector – like with our work at Sydney Opera House.

For April's charity of the month, Coopers Fire raised £110 for the Oddballs Foundation.
Previous Back Next