Qatar was once reliant on pearls. Before the 1940s, Qatar was excruciatingly poor – until oil was discovered. The country was transformed over the decades that followed, with one of the largest natural gas reserves in the world discovered underfoot. Today, Qatar stands as the single richest nation on earth. With the great wealth accumulated by Qatar, the country transformed quality of life for its people, while developing some of the most striking and advanced buildings in human history – and it’s still growing. 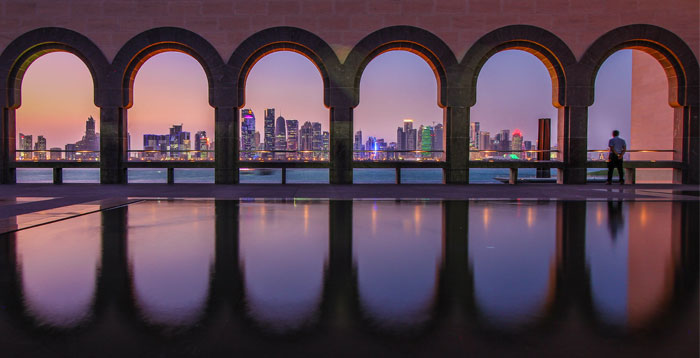 Rising From Sand and Sea

In the 1970s, the Qatari capital of Doha was almost as flat as a pancake – a handful of multistorey buildings poked over the horizon and there was little of note in terms of landmarks. In the last few years, the landscape has transformed beyond recognition, dominated by high-tech, architecturally brilliant skyscrapers. The skyline continues to evolve and plans are in place for numerous supertall skyscrapers, stadiums and leisure facilities.

Qatar is determined to push ahead with growth, regardless of its current status at the top. A government backed plan – Qatar Vision 2030 – aims to stabilise the country’s massive short-term growth into a long-term, diversified financial plan. Part of the plan is investment in small and medium businesses with growth potential. There are several priority industries targeted, including tourism, education and health care. Growth plans also include nurturing the chemical, metallurgy, plastic and high-tech sectors, to reduce dependency on a handful of (ultimately finite) natural resources.

By creating more jobs and diversifying the sectors it participates in, Qatar secures a future. And that future is one of continued growth. The demand for workspaces, hotels, offices, laboratories and factories means that Doha’s skyline will never settle – the shapeshifting city isn’t ready to stop growing yet.

The Qatar World Cup in 2022 is going to be a challenge to pull off. Qatar is hot; and that’s something of an understatement. Daytime temperatures in summer have been known to rise to over 50°C. During the summer, work halts from 11:30am to three in the afternoon to protect workers from the blistering midday sun.

Surface temperatures during this time of day are hot enough to bake cookies in a car. And while cookie baking weather sounds like fun, it’s not quite ideal for a football tournament. Little details like searing heat and formidable natural forces haven’t stopped Qatar before though, and now the country’s leading young minds, engineers and designers are inventing ways to artificially cool each stadium, to keep the beautiful game beautiful.

The 12 proposed stadia are grand in their design and ambition, and not just for their groundbreaking cooling technology – they’re beautiful monuments to the world’s favourite sport. Each stadium will be like an Olympic village; a destination for a day out and a world-class match venue.

Beyond building stadiums, there’s an issue of infrastructure to address. Doha is a major international hub as an airport and has exceptional roads and highways – but it lacks a public mass transit system. Doha Metro is set to bring a new era of public transport to the city.

It’s perhaps the most prominent construction project underway in the city right now – and it’s absolutely a priority. Without it, the World Cup will be a complete flop: imagine the baking-hot streets of Doha overrun with traffic and swarms of stranded football fans. It’s unlikely that FIFA or the nation of Qatar would stand for that kind of embarrassment, so it’s a good thing that Metro construction is 77% complete and on track for full operation by 2020.

It would be unwise to ignore the safety concerns raised about hurriedly assembled buildings. The truth is that Qatar fire safety and building regulations are some of the most up to date and rigorous in the world – from lessons learned the hard way.

There are undeniable issues facing Qatar – it’s often seen as a “bogeyman state”. And while it still has a way to go, the nation is actively making steps to improve itself – including in human rights and the way it treats those outside the regional culture. It’s a young country that’s already surpassed every expectation. It’s also a small country, with enough momentum behind it to enforce and uphold rapid change.

That capacity to change is everything; and with diplomacy, tolerance and good grace, Qatar could be soon be a shining jewel and role model for nations in the Middle East.

All of us at Coopers Fire wish Qatar well as it brings international football to a new home. After installing our own fire curtains in Doha, we know what it takes to comply with fire safety regulations in the impressive new buildings rising from the construction capital of the world.
To find out more, or to enrol in one of our educational training courses, call us on 02392 454 405 or email info@coopersfire.com.

Coopers Fire has investigated the latest fire prevention and protection statistics for England, for the year ending March 2020.
Previous Back Next