Is there a relationship between poverty and fire?

Around the world – in Manila, Rio de Janeiro, New Delhi, Cape Town – there are slums.  These “informal towns” are densely populated areas, where building regulations are unheard of. Structures are built with readily-combustible materials; whatever’s available and strong enough to bear weight will likely make its way into a building. Cooking and heating are achieved with open flames or gas burners, and electricity is commonly routed through a jumble of exposed wires. Slum fires are regular occurrences; deadly and relentless.

In the developed world, things are better – although not by that much. So, is fire an inevitability of poverty, or just as likely in wealthier areas? 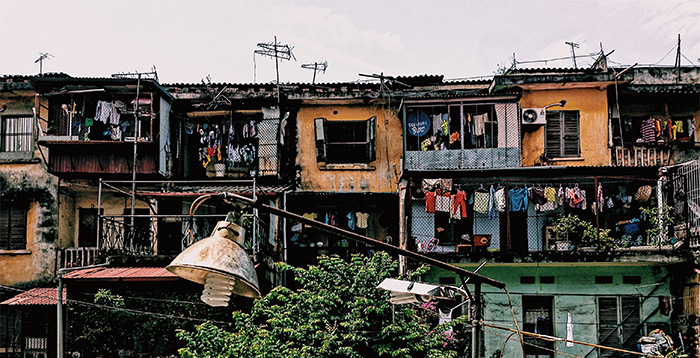 Fire can impact anyone, regardless of wealth or status – even the royal family suffered a fire at Windsor Castle.

There’s a difficulty in getting an accurate measure on the split; there are far more poor areas and poor people than there are wealthy, so fire instances in lower-income areas will naturally be higher. It could be aggregated and scored on a scale, but there really isn’t that much data in this field – intriguing when you consider the frequency and destructivity of fire.

A study in the city of Hamilton, Ontario, uncovered clearer links between socioeconomic status and deadly fires. The outcome is quite stark; the inner-city wards, with older housing and high rates of poverty, experienced fires up to ten times more frequently between 2012-2016. Those fires were much more likely to result in injury or death.

There are so many contributing factors that it’s hard to create an accurate picture. Smoking rates are higher in working-class people than any other group, true both in North America and the UK, where fires from smoking account for 6.3% of all fires – and 26.1% of fire deaths are smoking-related. The gap between wealthy and poor in the same city is widening globally, but so is access to emergency services. Getting to fires through dense, traffic-packed city centres can be difficult, even when stations are local.

In 2019, we investigated the ways artificial intelligence and machine learning are being used to predict fires, manage emergency services and better prepare fire-prone areas. These remedies are a long way from being applied to the poorest areas, especially when data is harder to come by.

Some, like John Verbeek, Hamilton’s assistant deputy fire chief, cite the need to change the behaviours of lower socioeconomic classes (leaving cooking unattended and carelessly smoking) – but this is an unjustifiably broad stroke of the brush when you consider that cooking fires are the leader in all socioeconomic classes. Electrical faults and fires started by portable heaters are more likely in older rental properties, primarily inhabited by poor residents, where there’s no money to make improvements.

The fire of June 2017 is forever cemented into a nation’s memory. That tragedy was inequality in action; 72 of the poorest and most vulnerable residents of the City of London, killed by a fire in the building they called home. It highlighted a broader truth: that poor people are always hit the hardest by tragedy.

The cause wasn’t unattended cooking or a burning cigarette – but an electrical fault in a fridge. Combustible cladding and improver evacuation advice led to complete disaster.

Subsequent studies into deprivation and fire in the UK find links between poverty, instances, injuries and deaths from fire.

While the causes are hard to pin down, what is clear from studies of disasters is that catastrophes like fire affect the poor more profoundly than the rich. This is the case in urban fires as well as wildfires – but we don’t have to look far from home to find evidence.

Our hope is that new technologies and changing mindsets will bring about action and fire safety for all; because a fire won’t discriminate. Perhaps it’s time for people to take the same position.

At Coopers Fire, we’re always developing, testing and improving our products – to keep us at the cutting edge of fire safety in a changing world. To find out more or to enrol in one of our educational training courses, call us on 02392 454 405 or email info@coopersfire.com.