Fires on Mars? How to Uphold Fire Safety Off-Planet

In May 2020, as the world grappled with life in lockdown and a deadly virus, things couldn’t have looked more bleak for humankind. Out of the chaos came a glimmer of hope for our future: the first crewed spaceflight flown from US soil in almost a decade. We know that, if we want to survive as a species, we’ll eventually have to step away from the planet that spawned us – but our journey to the stars will be fraught with dangers. Chief among them will be our oldest and deadliest tool: fire. 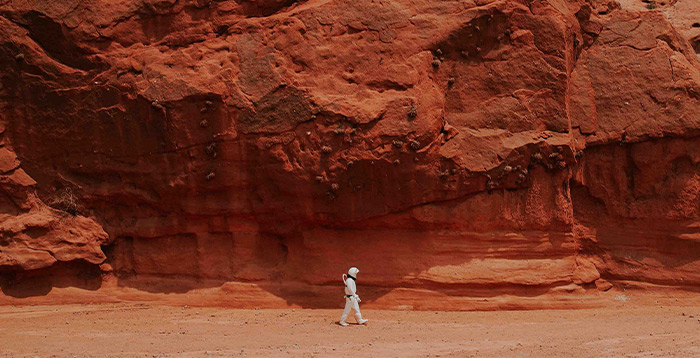 Our planet is the only natural environment in the known universe where fire can happen. That’s because there’s oxygen in the air, fuel for combustion and heat for ignition – each of which is essential for fire. Remove any of these elements, and there’s no fire.

Spacecraft are closed ecosystems which do their best to emulate our home environment, allowing humans to survive in space. They carry oxygen for crewmembers to breathe, and provide heat to keep their bodies at optimal temperature. Spacecraft are also loaded with highly combustible propellants for movement – giving them everything they need to support not only life, but fire. And there are no fire escapes in space.

In February of 1997, the ageing space station Mir suffered a damaging fire that almost led to disaster. The tiny compartments where the crew lived and worked were almost overwhelmed when a fuel cartridge erupted into flame. With no exits, ventilation or way to avoid the rapidly increasing heat, the crew had to act fast to bring the fire under control.

Eventually, the fire was tackled – and fire safety in space was brought back into the spotlight for the first time since the Apollo 1 disaster.

The Wake of Apollo 1: Launching Safely

The cabin of Apollo 1 burned during a test of the electrical system, killing all three astronauts on board. The 100% oxygen atmosphere of Apollo 1, poor hatch design, use of highly flammable materials and the lack of emergency preparedness all contributed to the fatal fire. It was a spaceflight tragedy that wouldn’t be matched until the Challenger disaster in 1986.

The fire led to complete redesigns and new fire safety protocols. It paved the way for understanding how fire is tackled in small, pressurised space vehicles – and when humans leave Earth, the same principles will be established for fire safety off-planet.

Mars is the next moonshot. We don’t know when a human mission to Mars will occur, but we do know that it’ll be extremely risky. The outward journey will take around nine months of travel at least. In order to return to Earth, astronauts will need to wait on Mars for 500 days for the planets to align favourably enough for a low energy, nine month return trip.

That means building habitats on Mars.

We know that fire can only burn naturally on our planet, and Mars doesn’t have a dense atmosphere or enough oxygen to allow flames to burn – but space station and spacecraft fires are a very real danger, and with crews living and working in close proximity, fire would be disastrous.

The windy, cold and hostile extraterrestrial environment of Mars would not allow fire escapes to be built into a habitat: but what about “lifeboats”?

We’ve written about compartmentation and zone pressurisation when designing fire safety into buildings – but imagine these in an extraterrestrial application. A Martian habitat would need to be heated and pressurised to support life. If a fire broke out, the simplest way to stop it would be to use compartmentation to seal off the affected area, then use the pressure to “blow out” the room with the fire – exposing the fire to the elements of Mars, where fire cannot burn.

Areas of the habitat would need to be designed as lifeboats of sorts – sealed from all other areas with the sole function of surviving a fire on the planet. This would take a modular building design.

Getting a complex modular building to Mars in the first place will be an incredible challenge – and we hope that when the day comes, fire safety experts are consulted to ensure the safety of the crew that makes that risky jump to our celestial neighbour.

Fire Protection for The Future

At  Coopers Fire, we’re always developing, testing and improving our products – to keep us at the cutting edge of fire safety.