Airport fire curtains are changing the way airports are built

In the past several decades, unfortunately, there have been several airport fire tragedies. These sadly could have been prevented or at the least controlled and damaged reduced had Airport fire curtains and smoke curtains been installed. 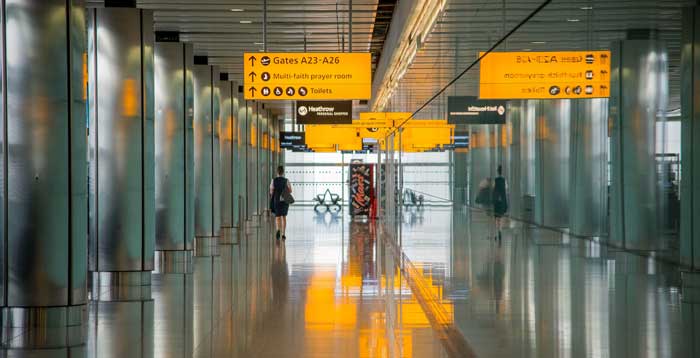 One example of this is the 1996 Düsseldorf Airport Fire which tragically claimed the lives of 17 people and seriously injured more than 62. This fire was caused due to welding works, where drops of molten metal met with the polystyrene insulation.

The fire spread rapidly to other terminal buildings completely unnoticed. This was able as it spread in the space between dropped ceilings and actual ceilings. By the time it was noticed, plumes of smoke and fire quickly filled the terminal buildings completely blocking off all safe evacuation routes. This is reflected by all fatalities caused by toxic smoke inhalation.

The fire itself, not stopped by airport fire barriers, was free to run riot. As a result, terminals A and B were completely destroyed and rendered unusable. The total effects of this fire totalled damages at the cost of DM 1 billion.

A similar scenario happened in the 2013 Nairobi Airport Fire. Although this fire didn’t have any fatalities and only two people were seriously injured, the damage caused was similar to that at Düsseldorf nearly a decade earlier. The cause of this fire is not known, but the lack of airport fire barriers, smoke curtain and fire curtains led to substantial damage. This resulted in the international arrival and departure units of the Jomo Kenyatta International Airport being completely destroyed. As a result, the airport had to close and divert its air traffic to Uganda, Tanzania, and other airports in Kenya.

Operations were partly reestablished a year later and a new unit opened in July 2014 and renamed as Terminal 1A.

What is so significant about both of these examples is their preventability. What they have in common is their lack of compartmentation due to them being airports and needing large spaces. This allows a fire to cover a large area rapidly. If these open spaces were divided up and safe fire exit routes protected, both tragedies would have proved less damaging. One way in which to compartment open space is via the installation of smoke and fire curtains.

As their name suggests, smoke and fire curtains stop, control and dictate the spread of smoke and fire throughout a building. By providing essential smoke compartmentation and fire containment they allow for safer evacuation. In airports, this can prove invaluable.

Used in the place of traditional non-loading bearing walls airport fire barriers and smoke curtains offer a high level of flexibility for architects and builders. They enable large open plan areas to align themselves with current fire safety standards. This is because protective curtains give a terminal building the ability to compartment large open spaces in the event of a fire.

Smoke and fire curtains work together to form a critical element of smoke and heat exhaust ventilation systems (SHEVS). Such barrier systems not only create a smoke-free layer between the floor and ceiling allowing safe escape. But they also reduce financial loss by preventing fire damage, smoke logging and enabling fire-fighting, which in turn reduces temperatures and delays the spread of fire.

Cooper’s Fire was commissioned to install airport fire curtains and smoke curtains in the impressive Dubai International Airport. This was a gigantic project. Dubai’s airport sees over 80 million passengers pass through its terminal buildings a year and is looking to expand in the next few years. Coopers Fire protected the entirety of Terminal 3 with commercial fire and smoke curtains.

One key product we installed was The SmokeStop, Coopers Fire’s signature smoke curtain. This particular product is comprised of technologically advanced fire-resistant fabric that is encased in a compact steel housing. This housing allows for  a higher level of protection and control. The SmokeStop remains invisibly retracted until activated by an alarm or detector signal, at which time it descends safely to its operational position. A SmokeStop barrier works to significantly reduce the spread of toxic smoke and damages caused by both heat and smoke.

Not only do our bespoke designs seamlessly match the ceilings and remained hidden from views until deployed, but they also provide up to four hours of protection against fire, heat and smoke damage. This really can mean the difference between life and death and can prove essential for protecting airports.

The Future of Open Space is Secured

Smoke curtains and fire curtains provide the all-encompassing solution. Their ability to compartment space and offer boundary protection today enables designers to replace traditional bulkier fire safety equipment. Meaning they can achieve modern and safe open plan environments. Which is key as they are becoming more necessary to the functioning of many commercial buildings. For example, in airports, museums , flagship stores and shopping malls.

If you want to find out more about our exclusive range of airport fire curtains and smoke curtains, please visit our fire curtains page or contact us directly.

For April's charity of the month, Coopers Fire raised £110 for the Oddballs Foundation.

It has been a while since we last discussed the retail and hospitality industry being back in business. But, with…
Previous Back Next