In 1500 BC, an ancient civilisation developed an incredibly complex underground city – complete with escape routes and proper ventilation – which lay forgotten under Turkey for thousands of years. It looks like that ancient knowledge is about to make a comeback. 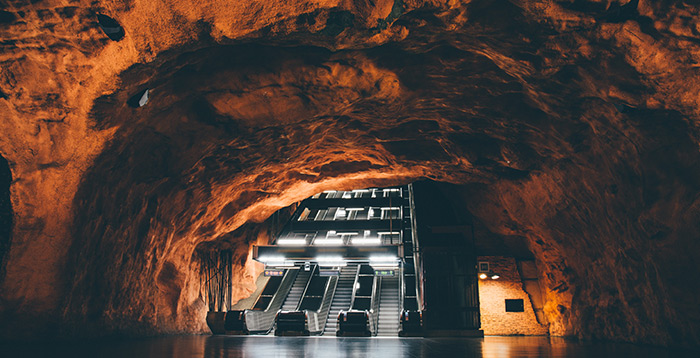 What Problem do Underground Cities Solve?

Underground cities, challenges and all, might be necessary quite soon. While the claims that we’re running out of space for everyone are grossly exaggerated, there are issues of density and environmental factors that will eventually force civilisation to expand downwards. We’re approaching the limits of how tall we can make our buildings, and how much of the natural world we can reasonably sacrifice for expanding cities.

We’re also facing a global crisis of climate change. Whether or not it’s human made is at this point, irrelevant; it’s happening and it will significantly alter day to day living and our access to resources. Our planet’s surface could become hostile to life in a matter of decades, and completely destroy the biosphere before the century is out.

Abandoning the planet for pastures new won’t be possible in that time period, or maybe ever. For a start, there’s no other pasture to speak of – and the very furthest limits of our reach to date have only taken humanity to the moon. In astronomical terms, we haven’t even left our own driveway.

The likes of Musk and Bezos would have us believe that colonies on Mars are the future, and that we need to develop an escape plan for a dying Earth – starting now. But as time goes on, the idea seems to pan further into the realms of fantasy; or rather, the fulfilment of a billionaire’s fantasy.

Of course, billionaires are free to spend their time and money as they wish – but if they’re really trying to save life as we know it, then they should focus their efforts on Earth. And if the surface isn’t going to support us anymore, maybe they’re looking in the wrong direction.

What Problems will Arise?

Underground cities of the future could save us from a future of extreme weather, blistering heat and unbreathable air. And many of the immediate problems of habitable subterranean structures have been solved, thanks in part to London’s explosion of so-called “iceberg homes”. We know what geological challenges to expect, what reinforcement to apply and how to waterproof below the water table.

Making big, complex structures is one thing: but how will we grow food? How will we deal with industrial waste? How can we seal in breathable air and get rid of toxic, flammable gasses? Speaking of which – what happens if there’s a fire, and no surface to escape to?

Design will be the critical aspect – the make or break of successful underground living.

Solving the Problems of Living Underground

Food needs sunlight and lots of water to grow. Keeping livestock healthy underground (and humans, for that matter) will be difficult. Sunlight can be simulated to an extent, giving plants and people the UVB light they need to survive, and water can be collected from a nearby aquifer (assuming the presence of one), our brought from the surface.

But the mental and social benefits of sunlight and open skies are much harder to fulfil. While a simulated version of the sky might briefly curb the need for clouds and sunshine, the veneer will eventually begin to peel.

It runs much deeper than what we see; smell and temperature have profound effects on us, and if you’ve ever spent time in a subway system, you’ll know that those elements are often unpleasant.

Emergency planning and contingency need to be considered deeply. Of course, we already have underground structures, where bad things have happened. Darkness, suffocating air and collapse are real threats when underground – but where do you escape to when surfacing isn’t an option?

In the event of a fire, compartmentation could help reduce damage, containing fires quickly. With sufficient planning, several protected means of escape could be established while preserving compartmentation, using zone pressurisation to maintain a smoke free way out.

Where is “out” in a self-contained, underground city? Perhaps a sub-subterranean bunker, or a series of over-designed redundancies could be integrated into each section – but this would still leave people trapped.

This is where the compromises of living underground begin to unravel, and it starts to resemble folly. But the questions raised by underground city planning are still far easier to answer than “can we colonise Mars?”.

If and when we do move underground, safety will be paramount. We already have the technology to make spaces safer to live and work in – and we’ll be ready to scale it up to the biggest challenge the world has ever faced.

At Coopers Fire, we’re always developing our products to keep us at the cutting edge of fire safety. To find out more about our products and services, or to enrol in one of our educational training courses, call us on 02392 454 405 or email info@coopersfire.com.

Keeping your business safe at Christmas

The run-up to Christmas can be an extremely busy period for many businesses: There’s the rush to get everything finished…

How Are Fire Curtains Made?

We’re proud that all of our fire curtains are built by us at our manufacturing plants in the United Kingdom. But how…

Coopers Fire are committed to the welfare of all our employees and the wider communities in which we operate.
Previous Back Next