Modern building design has taken giant leaps since the days of the first architects. Today, the challenges facing our growing world are hugely different. Each hurdle has brought on innovations by the barrelful – and with each new accomplishment, new challenges arise. 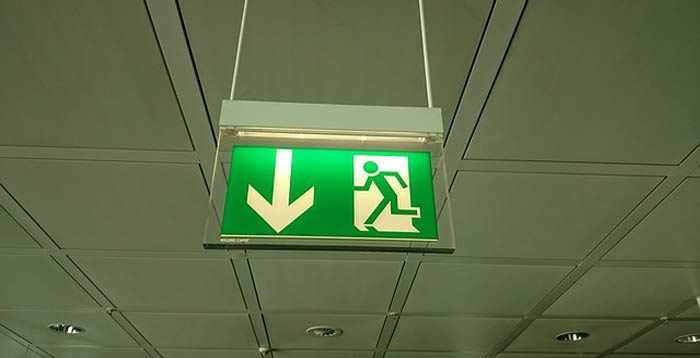 The proliferation of once impossible materials and building techniques has let large, open-plan indoor environments become commonplace. This has freed architecture and building design to become a freeform, expressive art: the world has never looked so good.

But safety must remain the top priority. A protected means of escape, allowing safe passage in the event of a fire, is incredibly difficult to engineer in an open-plan environment. Containing fire and smoke, and mitigating damage in a sprawling indoor area is a vital requirement of any large building. So, how’s it done?

Good design is not just how something looks. The coining of the phrase “form follows function” is widely credited to the father of skyscrapers, Louis Henry Sullivan, and its meaning is twofold:

The first interpretation is one of compromise – if an interior space needs more walls and compartmentalisation in order to work to safety standards, then sacrifice aesthetic design. The artistic value of a structure and the vision of the architect can be blighted with a single paragraph of regulatory text.

Fire curtains have largely eliminated that painful compromise, a burden borne by architects as well as contractors. The flexibility of fire curtains allows them to be used strategically, to create a protected means of escape that only appears in the event of an emergency.

Practically Invisible, with Full Protection When it Matters Most

With a safe passageway to fire escapes, the chances of surviving in an emergency are drastically improved – which is why regulations demand a protected means of escape.

If key fire exits are obstructed by plumes of toxic smoke or by intense flames, people become trapped. No matter how beautiful a building may be, loss of life and injury are simply not worth it.

Fire and smoke curtains can prevent catastrophic devastation from spreading throughout an open indoor space, allowing precious time for emergency services to carry out rescue operations and tackle the flames – reducing and even removing structural damage and financial losses in the process.

All of this is achieved with a practically invisible installation, which can be seamlessly integrated into new buildings, or retrofitted to older, more intricate structures with minimal impact to aesthetics.

Dubai has suffered its fair share of fires. Arguably the structural innovation capital of the world, the city’s impressive structures can fall afoul of the arid environment. Heat, dryness, flammable insulating materials and densely populated buildings have all played their role in causing these fires – but this young city has learned from the trials of the past.

Across the Persian Gulf, the Qatari capital of Doha is just as serious about fire safety. Coopers Fire was called upon to install multiple vertical fire curtains in the Hamad Bin Khalifa Medical City Health Centre.

This state of the art, open-plan facility was brought to regulatory standard by Coopers and Chubb, delivering the high-quality finish required by the client.

To read more about this case study and our installations, click here.

If you have a question or would like to find out about designing a protected means of escape in your building, give Coopers Fire a call on 02392 454 405 or email info@coopersfire.com.

We are happy to provide CAD drawings, quotations and information on fire protection, in accordance with British, European and American Standards.

Workplace fire safety is a critical aspect of business operations that every employer has to conform to. The alternative to…

It’s vital that business owners and managers have a good knowledge of how they can improve fire safety levels. It may…
Previous Back Next