Escape signage is a vital part of fire safety. It provides immediately recognisable cues to people in a state of panic – it’s a life-saving feature, not an afterthought or a stage of design to be overlooked. As the world and the buildings within it develop, we’re making bigger strides into accessible spaces, complex systems and increasingly ambitious projects. Digital emergency signage is now being proposed in dynamic environments where an emergency can develop in disorienting and unusual ways – but it could help get people out of buildings safely and quickly, too. While it’s currently being developed for emergencies on board cruise ships, this new technology could be applied anywhere. 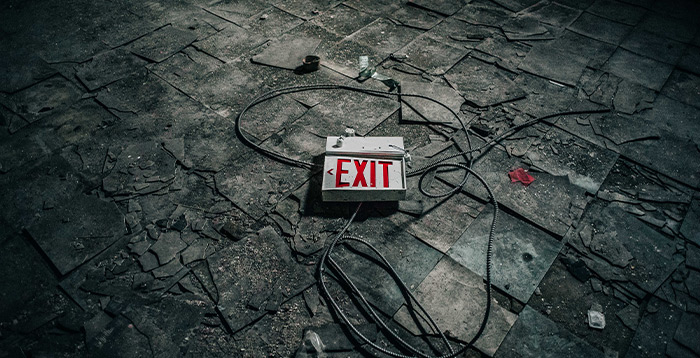 Lessons have been learned since the Titanic – but civilian maritime disasters are not yet a thing of the past. In 2019, a cruise ship became stranded in rough seas after losing power. Videos taken onboard show the contents of the ship being hurled across the floor, as the vessel pitched and rolled on the waves.

That’s why recommendations have been submitted for digital signs to be installed in cruise ships. These proposed signs would sense the changing emergency and display clear information leading the way out. The study in Fire Safety Journal was age-differentiated among people with different physical, mental and emotional requirements, to help understand decision-making in critical situations across a broad spectrum of people.

The results showed that digital signage can effectively guide people to suitable escape routes in a changing emergency, even against competing environmental cues. This technology could considerably enhance the safety and the efficiency of evacuations on passenger ships – but it wouldn’t be limited to maritime applications.

As buildings become taller (or underground cities begin to develop), getting to safety in an emergency becomes more complicated. Those complications are compounded with an ageing population, with reduced mobility and senses. Giving visual, audio or other sensory cues to help guide inhabitants to safety is a challenge to meet – but digital signage technology gives us the tools to achieve the goal.

In a developing situation, a centrally controlled, dynamic emergency escape signage system can guide more people out of danger in an efficient manner. With integrations into the wider fire safety strategy of a given building, signs could be activated when a fire curtain has been deployed to compartmentalised a route, or if flames and smoke have made certain areas impassable.

A digital system could go beyond visual signage; it could broadcast information to connected devices, like hearing or mobility aids, to give more personal and effective guidance to disabled and elderly people in an emergency.

Digital signage has already been shown to work for a diverse group of people – and as the world becomes more connected, it could achieve more than we can imagine right now.

Fire Safety for the Public

Coopers Fire is a leader in fire safety. We manufacture industry-leading fire curtains and provide educational training courses and consultancy.