SINCE THE BEGINNING OF THIS CENTURY, COOPERS FIRE HAVE INSTALLED FIRE CURTAINS AND SMOKE BARRIERS IN A NUMBER OF PRESTIGIOUS BUILDINGS AROUND THE WORLD.

Below is a list of some significant and prominent projects Coopers Fire have installed either fire curtains or smoke curtain barriers to help protect the occupants from the harmful effects of smoke and fire. 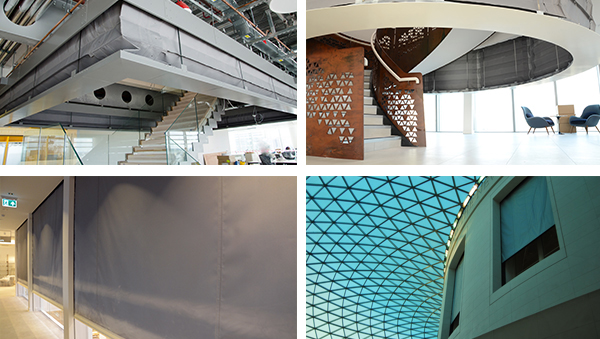 Coopers Fire are proud of the projects we have worked on and were chosen to install in these prestigious projects as we are recognised as the modern alternative to firewalls, fire doors and glazing. Fire and smoke curtains give designers the freedom to design modern, open-plan spaces without compromising fire safety.

The Shard is one of the most iconic tall buildings in London’s skyline and Coopers Fire are proud to have a range of fire curtains installed on different floors throughout the building. Our FireMaster and FireMaster Plus2 products are installed to protect the building and it’s occupants in event of a fire including the residences, offices, hotel, restaurant and the observatory.

Working in conjunction with the building’s state of the art mechanical air handling systems, the SmokeStop™ smoke curtains were developed by Coopers to deploy from the ceiling to compartmentalise the backstage area
of the theatres and protect the auditoriums from filling with smoke.
To read more: View Case Studies

Buckingham Palace is one of the most famous buildings in the world and Coopers are particularly proud to be protecting this building and its occupants with our fire curtains. Our FireMaster products are installed to prevent the spread of fire and therefore offer compartmentation and protected means of escape in the event of a fire.

In order to protect the new laboratories and the collection of important pieces stored in the museum a series of deployable fire curtains were designed into the building to not only protect the collection but also to prevent the spread of fire and smoke and allow the safe evacuation of the occupants in the event of a fire. To read more: View Case Studies

Chek Lap Kok is one of the world’s largest and most advanced airports. It was important our smoke curtain products met the stringent fire safety regulations of the Hong Kong Fire Services Department whilst offering an open plan design.

Coopers installed a multisided round smoke curtain in the Shanghai Apple store. SmokeStop™ smoke curtains were installed around the store’s central, spiral staircase to contain smoke in the event of a fire.

SWISS RE (THE GHERKIN)

Protecting the building’s 41 floors from smoke migration required a comprehensive smoke containment and channelling strategy designed to move smoke safely through and out of the building, effectively separating the tower’s occupants from smoke in the event of a fire. To read more: View Case Studies

Coopers were appointed to develop a smoke curtain system to provide an unintrusive method capable of controlling smoke migrating from the lower floors. It was also necessary to protect the un-insulated glazing installed above the atrium’s reception area with an approved fire curtain barrier system approved to provide a 2 hour insulating zone. To read more: View Case Studies

In this project Coopers Fire provided 300 SmokeStop™ smoke barriers, which were designed to fit the shopping mall’s vaulted ceiling, curved features and critical evacuation points. It was also important for all barriers to remain hidden within the ceiling until activated by a fire alarm, meaning that the aesthetics of the building are not compromised. To read more: View Case Studies